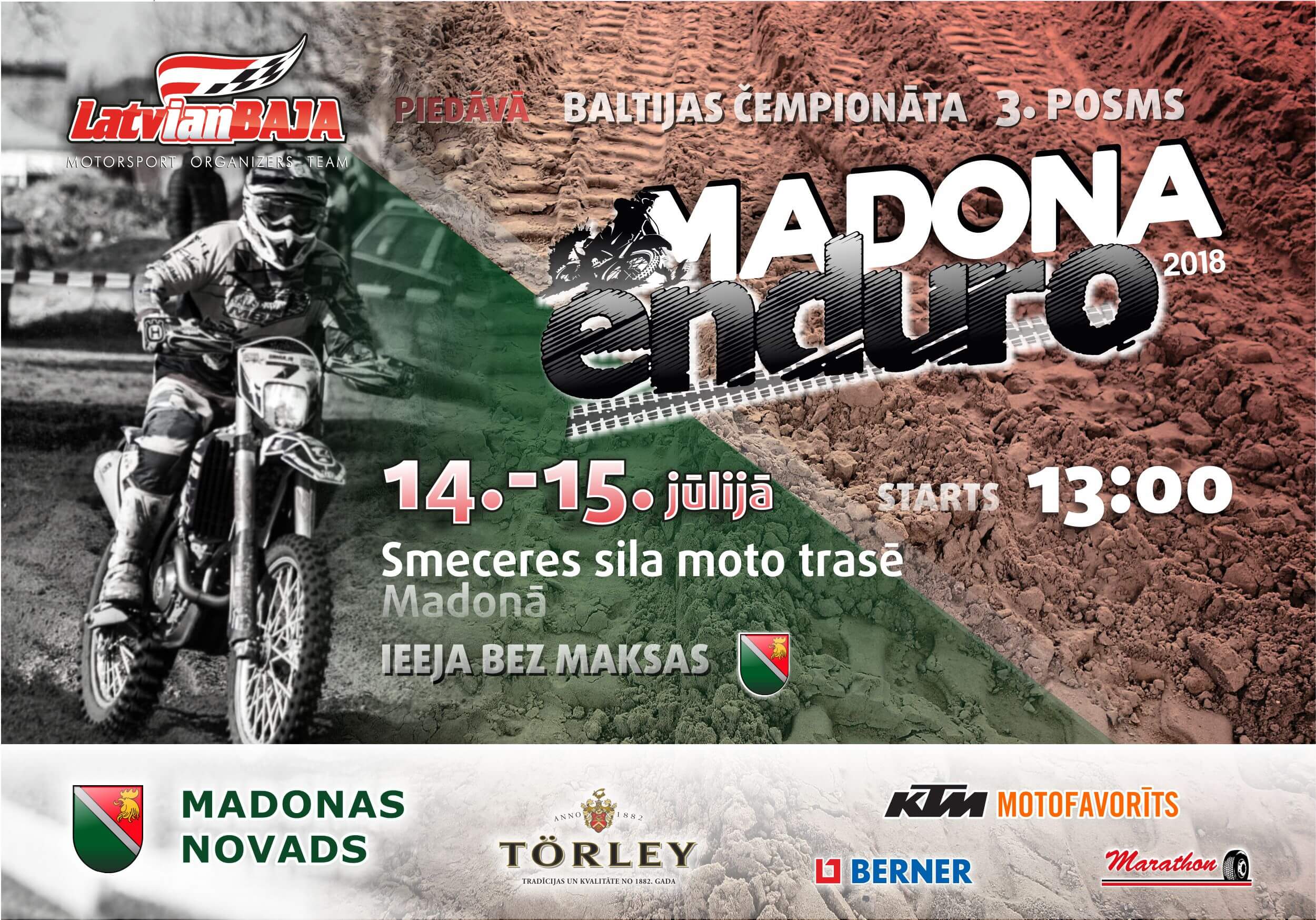 In the vicinity of Madona, the Enduro motorcycling track “Smeceres sils” is known as one of the best, but at the same time one the most complex Enduro routes in Latvia. In this competition stage, the Enduro route configuration will be similar to the one in the previous race, with only minor changes. Those athletes who participated in the Enduro Sprint race in April this year will be quite familiar with the route.

On the first day of the race, on July 14th, before the start, athletes will have the honour of opening the Enduro Festival in Madona with a parade trip through the city centre.

This will be the final phase of the Baltic Championship Enduro. For every day of the race, athletes will have the opportunity to acquire additional points in their overall Latvian championship rankings.

In a conversation with one of the fastest Latvian Enduro athletes Ivo Šteinbergs (CEC I.S. Racing), he told that he already knew what to expect from the Madona route. “It is a good thing that we have had competitions already, because it is important to know what to expect during the final stage. This will be the final stage of the Baltic Championship, which is very important, so we need to prepare well. Everyone is preparing, and we are too. The main thing is to enjoy the competition and then the result will come. Two interesting days are coming soon!”

In a conversation with the experienced Enduro athlete Jānis Vinters (JVE Moto Team), he hopes that in Madona the Enduro stage will be as interesting as during the Enduro Sprint. “Since Enduro does not have quads classes, it has become more complex, harder to drive, and more interesting. Beginners have a chance to enjoy the real Enduro instead of driving along relatively simple routes. Now the competitions are more challenging. I wish a wonderful time in Madona, without rain and dust. And hopefully we will survive two days in the woods of Madona.”

The race organizer Romāns Ērkulis: “For Latvian athletes, the route will already be known, because there will be the same speed test and also the route similar to the Enduro Sprint. The route will be interesting, without gravel roads. The total length of the route is 40 kilometres. The first will be a cross test of approximately four kilometres and the second will be Enduro test with a length of five kilometres. The Enduro Sprint route has been extended, adapted according to Enduro requirements. The E classes’ athletes will have a slightly longer route. On the first day athletes of respective classes will have to drive three or two laps. On the second day everyone will have two laps.”

Head of the Enduro commission of Latvian Motorsports Federation Kaspars Ērkulis (Kalsnava MB): “The final stage of the Baltic Championship and Cup Enduro Madona 2018 is coming. I am glad that it will take place in Madona. There is a great track here; and this has also been confirmed by many riders who have expressed appreciative words about the well-designed route and its complexity. The organizational level has also been highly recognised. In my opinion, Madona now has one of the best Enduro routes in the Baltic States. Let`s meet in Madona!”

This website uses cookies to improve your experience while you navigate through the website. Out of these, the cookies that are categorized as necessary are stored on your browser as they are essential for the working of basic functionalities of the website. We also use third-party cookies that help us analyze and understand how you use this website. These cookies will be stored in your browser only with your consent. You also have the option to opt-out of these cookies. But opting out of some of these cookies may affect your browsing experience.
Necessary Always Enabled
Necessary cookies are absolutely essential for the website to function properly. This category only includes cookies that ensures basic functionalities and security features of the website. These cookies do not store any personal information.
Non-necessary
Any cookies that may not be particularly necessary for the website to function and is used specifically to collect user personal data via analytics, ads, other embedded contents are termed as non-necessary cookies. It is mandatory to procure user consent prior to running these cookies on your website.
SAVE & ACCEPT